The Oscar awards have brought the theme of racism to the debate in all mass media and social circles with the films Green Book and Roma. In this post, I will focus on the very unfortunate classist and racist behavior that many Mexicans have shown after the Oscar nomination of the actress Yalitza Aparicio, the actress starring in Roma. All the world has figured out that Mexico is full of classist and racist Mexicans, towards others Mexicans.

I am Mexican and I really feel very embarrassed when I read or hear other Mexicans verbally attack Yalitza because of her origin. She is indigenous, and many Mexicans think she did not deserve that nomination because she is not as pretty as other Hollywood actresses (by the way what is beautiful and according to what or who) or because she is not a professional actress, she just graduated from kindergarten teacher school, even many of them think Roma is a very bad film.

After giving you some context, now I can explain my point of view. The movie Roma is not a commercial movie, Roma is a film which you should watch slowly and try to understand the story because it is explaining how the Mexican society was in Mexico city in the 70s. In the future, the movie could be used as a reference for history classes (at least in Mexico). The students’ movements, how the government acted and how the culture changed now compared to then.

But there is even a more important topic that probably not everyone identified: women from different social status being strong together because of machismo (macho men). Yes, the actress Marina Tavira interpreted to Sofía the boss of Cleo (Yalitza Aparicio) in Roma. Sofía found out her husband was cheating on her, he left her and after that, they got divorced. Cleo (Yalitza) was not married, but got pregnant with her boyfriend and when she told him, he ran away.

I will not spoil more of the movie and I am coming back to the topic. I must say, most people, or maybe all the ones that are being classist and racist with Yalitza are ignorant and have not experienced life abroad. If they had, they would have known that all cultures are respected and there is no culture that is better or worse. Cultural diversity makes the world richer and it is wonderful to share experiences with people from different countries and cultures. When you work, study or live abroad and you have to get in the system of that society, you learn how appreciated you are and the contribution you make.

Suddenly, you figure out that each society has its own values, ways of communicating, rules, beliefs and ways of thinking and taking decisions in life. Then and only then you understand society is never wrong, for better or worse, there are only thousands of ways to live life.

If you are Mexican and you were one of those who attacked Yalitza, please answer me these two questions: Have you ever lived abroad? And how was that experience?

If you are not Mexican and you heard or read about racist and classist comments from Mexicans against Roma or Yalitza herself, I apologize, because Mexico is still ignorant and immature, Mexicans are still learning about multicultural life.

Are you wondering: “what the bleep is a magic town in Mexico?” Is it a ghost town? A town where there are magic trick conventions? The answer is: Nooo, none of the above.

A Magic town in Mexico is, according to Tourism Mexican Ministry:

“It is a locality that has symbolic attributes, legends, history, transcendent facts, daily life, in short magic that emanate in each one of its socio-cultural manifestations, and that nowadays means a great opportunity for the tourist use. The Magic Towns Program contributes to revalue a group of populations of the country that have always been in the collective imagination of the nation as a whole and that represent fresh and different alternatives for national and foreign visitors”

Check out some of Magic Towns in Mexico

Mexico has, so far, 121 Magic Towns, and the program started in 2001, but no all towns can be called Magic Towns, the Tourist Mexican Ministry established requirements to be considered a Magic town, some of them are:

When the town is named Magic Towns it gets money from the federal budget in order to develop all activities and maintenance, however, there are requirements that the already called Magic towns must follow, otherwise, they could lose the designation of Magic Town, some of the requirements are:

If you would like to visit a Magic Town, I recommend you to check this link where you will find the 121 Magic towns, and you can read all the information available about activities, places you can visit and more.

For myself, I’ve not been able to visit all of them, yet, but I plan to. My favorite thus far is Santiago, Nuevo Leon. 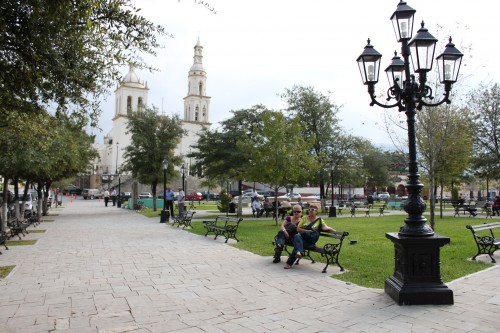 So, what is your next magical destination?

At first glance Russia and Mexico seems to be be very far apart, however nowadays, the world is getting smaller and smaller, thanks to the digital age and air travel.

The gastronomy from Russia is located in Monterrey, Mexico and you can find it in a small restaurant called Kalinka where two cooks (Russian and Ukrainian).

Some of its dishes, drinks, and desserts are:

And of course, they offer some mexican appetizer:

If you want to learn about the russian culture, restaurant Kalinka takes your stomach and your eyes on a trip to Russia. The decoration is very unique and moreover: Kalinka organized international meetings where you can meet people from many countries living or visiting Monterrey who is looking forward to meeting local people and other expats.

What are you waiting for? Enjoy Kalinka like them:

Can you imagine losing weight while eating cravings? Yes, even if you do not believe it, it is possible. The nutritionist Aimee Torres is dedicated to create the healthy version of the dishes her patients love.

Her idea consists of presenting Nutritionist challenges online. So, it does not matter where you are, you too can take the nutritionist challenge. Every challenge has a duration of 3 weeks, in that period you can lose between 3-5 kg. Here are some examples of dishes you can find in her menus:

Aimee’s diet is based on 7 food groups:

If you have a sweet tooth, she adjusts the menu so you can eat more sweet dishes, but if you prefer more salty dishes she can adjust it too. You only have to ask.

However, losing weight is more than that, it is about learning to balance the way we eat and you do not have to feel you are on a diet because you are not,  you are on your healthy lifestyle.

And as you can see, it is not all about salads, everything you like can be possible in your menu

Ready to take the healthy challenge?

“Our dead are never dead to us, until we have forgotten them.”

Day of the dead is a tradition in some countries in the world, for example, Guatemala, Ecuador, India, Japan, Peru and Mexico is one of them. In the mexican culture, the “day of death” is seen as the way of not forgetting the loved ones and also think they are visiting us, even though we cannot see them.

The party is divided into two dates depending on whether the person passed away as a child or as an adult. These occasions are celebrated on the 1st and 2nd of november respectively. The offerings consists of the food and beverages the dead enjoyed when were alive.

At the parties there are usually flowers, specially cempasúchil, salt, cal, color paper and a cruise made from cal. These are basic elements in order to create an offering, could be in house or a cemetery where the dead are buried.

Mexicans dress up and are made up to look like death. Some of them have dinner or lunch in the cemetery and leave a chair for their lost loved one who will come and spend time with them even though they cannot see them, but if they are lucky their presence can be felt. Additionally, there is music and mariachi. It is a party, where the deceased relative is honored and respected.

If you are interested in mexican culture, the movie  “Coco” is a very good example of the beliefs, traditions and values from Mexico and its people, for example, respect for old adults and relatives, love for family, which means family is always first, living in groups, keep tradition in every generation and more. Lose a loved one can be difficult to deal with, but if you take the approach of the mexican culture, you begin to feel a sense of calmness in your heart and mind.

By the way, mexicans celebrate day of the dead with a hot chocolate and “Pan de muerto”, means “bread of the dead”, no worries the dead are respected and they are not eaten hehe (just kidding). It is a sugar bread, if you would like to try, look at the recipe Bread of the dead

Always remember your loved ones, alive and dead.